Achievement Unlocked: Be a Great Developer!

About a year ago, I was sitting in a pub with Steve and Rob. We were talking about this and that, when we came up with an idea. Now, I say “we”…but I think I mean “me”…but I don’t want to offend anyone, as it did happen after about 5 pints!

The idea was a plug-in for Visual Studio that rewarded you for good keyboard shortcut use. So, if you commented code with CTRL+K, CTRL+C then you’d get 10 points, that sort of thing. I imagined the points flashing up in the corner, and there being some sort of hi-score online somewhere.

Sadly, like so many of my hair-brained ideas, I just never had time to do anything about it.

But, it seems I was not alone. The clever chaps over at Channel 9 have created a very similar sort of thing: the Visual Studio Achievements Beta Plugin! 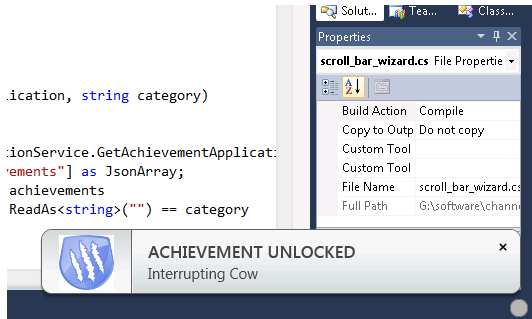 More than 10 breakpoints in a file? Achievement Unlocked, +5 points! (image from channel9.msdn.com)

Yes, this is as cool as it sounds. It’s not just keyboard shortcuts – you can be rewarded for a wide selection of things: loading custom VS Settings gets you 5 points, referencing 25 assemblies wins you 10 points, and unlocks the On The Shoulders of Giants achievement.

There’s also a leaderboard, where you can make your development début.

The only criticism I can see is that quite a lot of the ‘achievements’ awarded are for slightly shady, bad practices. I think that’s probably because it’s harder to identify good practice in a way that can be picked up by a plug-in. Mind you, my keyboard shortcut idea still stands, if anyone from C9 wants to implement it!

Get the plug-in from Channel 9 now. There’s also a display widget for your blog/homepage, showcasing your recent software skills.