If you’ve installed the Lync 2013 Beta client, you may have noticed that none of your Conversation Window Extensions (CWEs) work anymore. 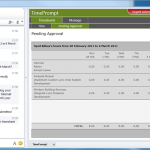 CWE example: this is TimePrompt from Modality Systems

When you try and instantiate a CWE in the Lync 2013 client, you’ll get a “Client not trusted”, similar to the error in Lync 2010 if the hosting site isn’t trusted.

As you probably know, in 2010 all sites which are to be shown as CWEs must be added to the Internet Explorer Trusted Sites zone, otherwise Lync won’t display them. This has changed in 2013.

The good news is that Lync now it’s own repository of Trusted Sites, and doesn’t have to use the Internet Explorer one, which was always a pain to roll-out on a large scale.

Lync now uses registry settings to validate trusted sites. This is great news, as registry changes are easy to roll-out to large amounts of people, and can become part of a MSI install.

To mark your CWE hosting site as Trusted by the 2013 client, add a new registry key:

Then, add a sub-key for each site with one or two switchs denoting it as http or https (such as in this example for this site):