Ahhh, TFS. Some of the most advanced ALM and source control features on the market. Innovations that truly make a difference in developer’s lives. And then… Project Rename.

If you haven’t hit this yet, you’re lucky, and you don’t change your mind enough. Renaming project names in TFS is curiously absent, and has been for a while. For all sorts of reasons (product name changes, team merges, changes of mind) it’s desirable to be able to change project names.

At the moment the only way around it is to attempt an export and import using the TFS Integration Platform.

It’s such a contentious issue that it’s even been the source of an April Fool’s Joke!

TFS Project Rename is coming! Brian Harry recently mentioned that he’d sat in on a design session at Microsoft for implementing this feature. The news is hidden in the comments section of a blog post around the latest (sprint 59) deployment: 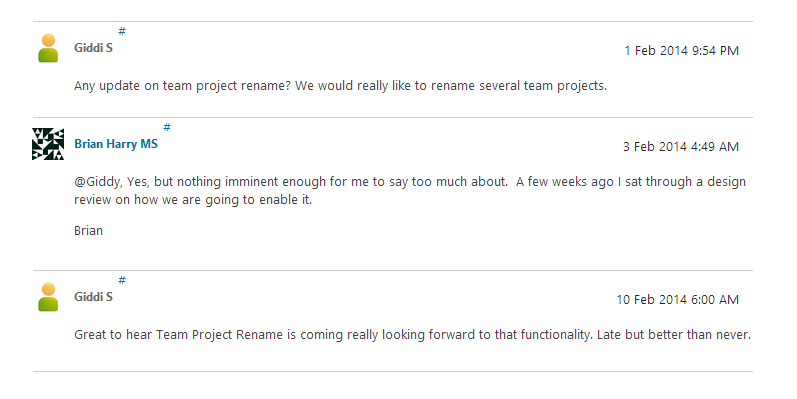 Obviously, that means that the feature is still some way out, but given the high number of votes it’s already received, coupled with the newer, faster cadence that Microsoft are now delivering at – might it be too much for us to hope for it in vNext of TFS? Or even better – delivered to TFSOnline in one of the next sprint deployments?!