Home » Development » 6 Tips For Getting Into The Zone Faster

6 Tips For Getting Into The Zone Faster

We’ve all been there.

We’re working on something. We’re 100% immersed in it, giving it all our concentration. We don’t hear, we’re not aware of hunger, tiredness, or aching muscles. We’re making real progress, flowing like a river. We’re fully in the zone, in the flow. Time flies.

This isn’t a post about the importance of being in the zone. There are so many different posts that talk about it, how easy it is to get dragged out, and how long it takes to get back into it.

Instead I want to explore what happens exactly what happens when we fall out of the zone, what happens in that second when you switch from being totally immersed on one thing, and then suddenly are thinking about something else. Why is it so hard to get back in the zone? More important, can we do anything to make it easier to get back?

I’m not a scientist or a brain-surgeon, but I do own a 30-year old vintage model, which I’ve been using for my experiments.

In normal day-to-day life, when I “get dropped out” the zone, I usually concentrate on whatever the distraction was, or I try and ignore it and maintain concentration on what I was working on. However, over the past few weeks I’ve been trying to concentrate on the in-between process, to try and understand what happens.

I wasn’t quite sure what I thought the outcome was, or whether it would be useful. The ideal, I guess, would be to see if there was a way to “capture state” the same way that your PC does when you hibernate it.

The best description I can think of is like when you wake from a dream where you know you’ve been dreaming but you then try and remember it.

You’ve just had the dream, so you must know what happened, but if you try and think about it, you can really feel it disappearing in front of you, like something turning to dust.

That is (I guess) because dreaming is your brain’s way of re-processing and discarding information, and what you were dreaming was already on the way out – so it doesn’t go in your short-term memory like normal.

It’s exactly the same feeling when you try and concentrate what you were thinking about as you get pulled out of flow (well for me anyway…I can literally see/feel the ideas floating away), and I think it’s the same thing happening.

Maybe when you’re in a flow your brain is operating at a different pace, a more intense state where not all thoughts get persisted to short-term memory, but instead sit in a sort-of super-short-term RAM…the same place where rote activities get stored.

(Did you lock the front door this morning? I’m sure you did…but can you ACTUALLY REMEMBER the act of locking the door in detail from THIS morning, not just any morning? I can’t… and often I can’t 10 seconds after I’ve done it. I’m the guy who has to turn around 2 mins down the road and double-check. I don’t think this is quite the same thing: probably the brain is deciding that it “doesn’t need” to remember to rote stuff. But at least it shows the brain is doing things on our behalf we’re not actively in control of).

The best dev-world example I can think of is remembering the values of variables whilst debugging. In a flow, I can remember the value of the variables, but if I get pulled out of flow, that information gets lost. However, I can always remember what variables they are, and where to put my eyes to get the value again. So, some of the information is in short-term memory, but in the heat of flow, some of it doesn’t make it that far.

If you’ve ever watched the fog rolling in over a mountain, covering up thousands of tons of rock in seconds, making something which a few moments ago was landmark visible for miles, suddenly disappear- it’s just like that.

There’s some studies that seem to confirm this sort of thinking. It only takes a 3-second distraction to take you out your flow, and from the original paper’s abstract: “momentary interruptions are disruptive because they shift the focus and thereby cut off the flow.”¹

It turns out that the brain does have a “working memory” – a sort of RAM. Everybody has their own personal limit, which is a fixed capacity. So, your working memory might be more than my working memory – meaning you can keep more “things” in your brain at any one time than I can. Your working memory grows as you age, until the age of about 15, when it stops growing.

A recent study has identified how the brain stores working memory. David Badre is professor of cognitive, linguistic, and psychological sciences at Brown University:  “In the immediacy of what we’re doing we have this small working memory capacity where we can hang on to a few things that are going to be useful in a few moments, and that’s where output gating is crucial.”

It’s worth pointing out at this stage though, that “working memory” is a gross over-simplification: there are are several different things going on, interconnected with each other. Check out this awesome graphic from brainSCANr: 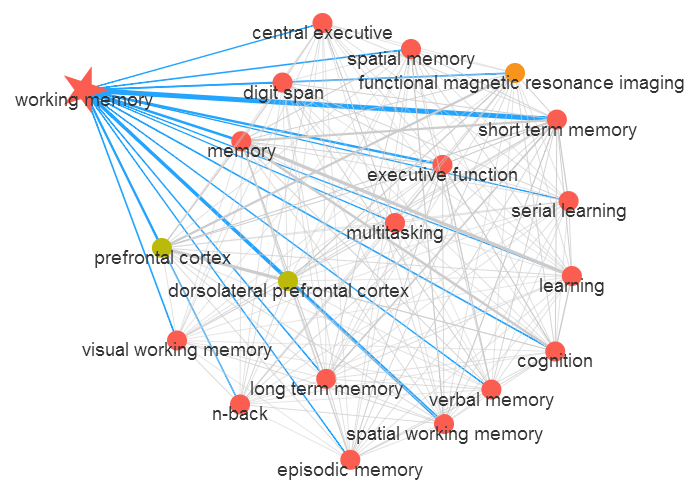 This is Scott Barry Kaufman:

He’s Scientific Director of The Imagination Institute and a researcher in the Positive Psychology Center at the University of Pennsylvania.

Based on his studies, the brain can be thought of in two sections. There’s the Attention Control Network. This is what you use to concentrate on something, recall things from your memory, and perform normal reasoning. He describes it as the “looking out” part of your brain: the part that does everything that isn’t directly related to you.

The other section is the Default Mode Network. This is your inner monologue, your stream of consciousness. It’s what gives you daydreams. When left to its own devices, it will construct models of the future, based on past experience. It’s also what gives us compassion and imagination – which means it’s very active in social interactions.

[this is the left brain / right brain stuff – but it’s actually a lot more nuanced than that.]

Normally in people, only one of these parts is active at any one time.

#ProTip: If you’re concentrating on a task that will be using your Attention Control Network to “think about stuff”, engaging in social media will naturally activate your Default Mode Network (compassion, social interaction) – slowing you down and making you less effective!

Really creative and imaginative people can keep both of these parts activated at the same time, giving them a huge advantage in being able to draw on imagination and creative thinking from one part of the brain to feed the other part.

The really interesting thing is that when we’re in “the flow”, in “the zone” – it’s our Default Mode Network that’s much more active. In addition, the part of the brain that acts as our inner critic is silenced. Maybe this is why everything seems to flow better – why we seem to be doing everything right.

The Default Mode Network is also the part of the brain that’s active whilst we sleep. Perhaps that’s why I equate the sensation of being pulled out of flow (the switch from Default Mode Network to Attention Control Network so I can concentrate on the distraction) from waking up from a dream (which would also cause a change in the active parts of the brain).

Knowledge is Power. Now we know what it means to be “in the zone”. We need to change our brains so that our Default Mode Network is more active. How can we “hack our brains” to get us into the flow faster, and return easier?

Here are some suggestions:

If you do get distracted, make the distraction as short as possible. Then, go back to step 3 and daydream, but not for as long. You just want to rally your thoughts, try and regroup. Unfortunately, you’ll never be able to get right back to where you were – but hopefully you can get close.

These are some thoughts I’ve had, based on what I’ve read, and my experiences. I’d be really interested to know if any of them work for you, or if you have any other tips. Maybe you do something different, that works for you? Let me know in the comments.