You have an existing TFS installation with TFS Build set up, which is then upgraded to TFS 2013. From that point, new builds created with the default template (TfvcTemplate.12.xaml) may not run. Or they may run, but produce incorrect or suspect output. On examination of the Build Agent, the working directories are not being correctly mapped with AgentID or BuildDefinitionID:

One of the TFS Build settings you apply via the TFS Administration Console is the working directory to be used for builds. It’s important to ensure that each build can run in it’s own separate folder, to avoid cross-contamination of the code. Normally you would segregate using the ID of the build agent, and the ID of the build definition: for instance D:\\Builds\\$(BuildAgentID)\\$(BuildDefinitionID). At build time these values should get resolved to numbers, to guarentee a unique folder. However, for newly created builds using the new template, this isn’t happening. As you can see in the screenshot, the parameters are not being resolved.

It seems that the parameter names have either changed from TFS 2012 to 2013, or the code that parses them has become case-sensitive. Where before $(BuildAgentID) would work, now it has to be $(BuildAgentId) or it won’t resolve. Same for $(BuildDefinitionId).

Changing the Working Directory entry in the TFS Administration Console to use $(BuildAgentId) and $(BuildDefinitionId) will fix the problem: 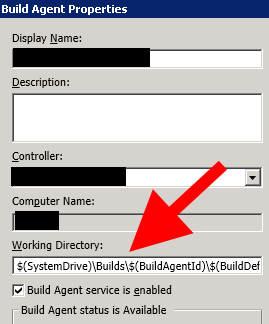 You can use the following variables in a build agent working directory:

Hope this helps someone with a similar problem, especially if you ended up here as a result of Google search!

Getting Started with Continuous Integration