Good news for enterprise developers everywhere who might have been waiting for these services to lose their Beta tags. Both the Azure Bot Service and the Language Understanding Intelligence Service (LUIS) went GA in the last day or so.

If you’d like to watch the announcement, you can do in this episode of the AI Show:

I’ve talked extensively about both these services previously, so I won’t cover old ground, but here’s some new information:

If you’re looking in the Azure Portal for “Bot Service (Preview)”, or “Bot Service”, you won’t find it. It’s now listed as “Web App Bot”: 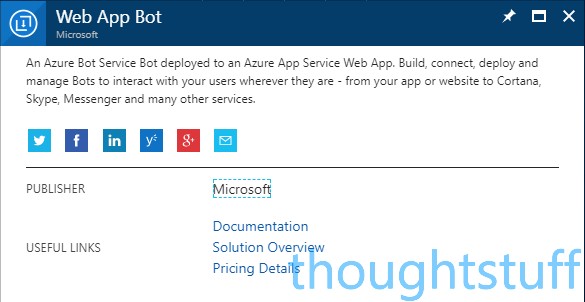 When creating your bot you now have a choice of different locations where your bot will live. The Bot Service is now generally available in 9 different regions namely West US, East US, West Europe, and Southeast Asia including new deployments in North Europe, Australia Southeast, Australia East, Brazil South, and East Asia regions.

There is also a published two-tier pricing scheme. There is a free tier, capped at 10,000 messages per month with no SLA, and a paid-for tier, priced per 1,000 messages and with a 99.9% SLA: 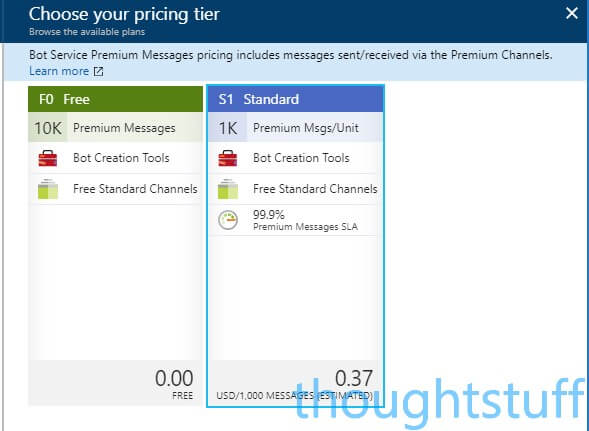 It’s time to wave a fond farewell to the Bot Framework Dashboard at dev.botframework.com. All the functionality from this dashboard has been moved into Azure blades, which makes a lot of sense.

“I’ll personally miss the Bot Framework Dashboard, though I fully understand why it’s better inside the Azure Portal. It’s made bots discoverable and consumable to many, many people. I’d like to take a moment to thank everyone involved in the Bot Framework Dashboard who have done such a great job getting us to this point. Truly, us bot developers have been “abstracting on the shoulders of giants” (stolen from @shanselman).”Tweet This

I’ll personally miss the Bot Framework Dashboard, though I fully understand why it’s better inside the Azure Portal. It’s made bots discoverable and consumable to many, many people. I’d like to take a moment to thank everyone involved in the Bot Framework Dashboard who have done such a great job getting us to this point. Truly, us bot developers have been “abstracting on the shoulders of giants” (stolen from @shanselman).

When you actually perform the migration, the following steps happen:

Once you have migrated, there is rollback procedure if things don’t go well.  More information about the migration in this MSDN article: Migrate your bot to Azure.

When you go to the Bot Framework Dashboard now, each bot has a ‘Migrate’ button next to it.

For LUIS, the changes seem smaller. The luis.ai dashboard is still where setup and management takes place, although there’s been some UI design changes, and all instances are tagged “v0.1″…which hints at a possible new version around the corner.

However, there have been some under-the-hood improvements: