Microsoft has produced a poster highlighting five reasons developers should be considering Microsoft Teams for app development. If you read this blog then you’ll know I’ve been advocating Teams as a development platform, but I think that it’s time to amplify that message and try and reach app developers currently building for other platforms, so this poster comes at a really good time. 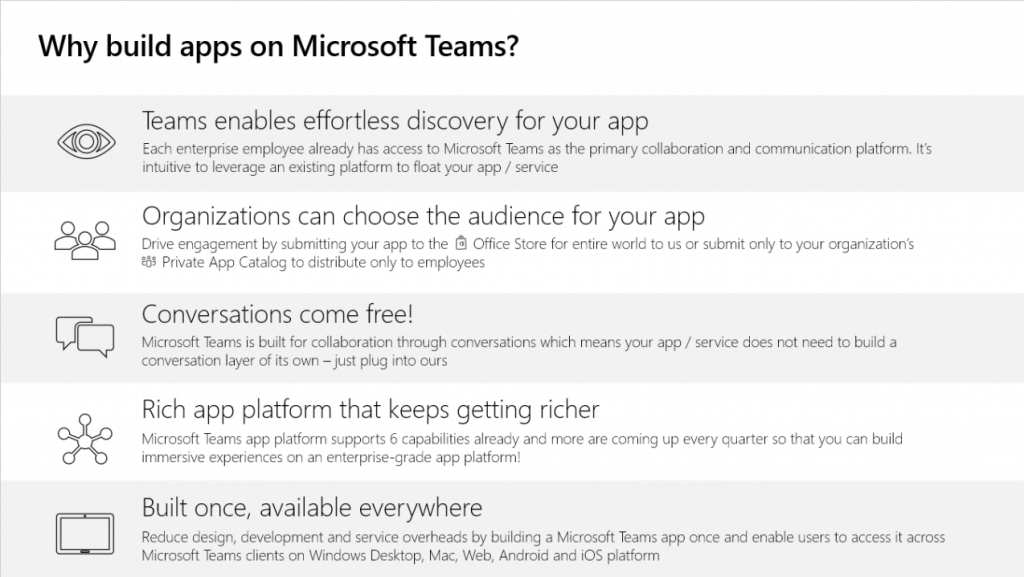 Let’s go through each one.

Every app store will tell you that they make it easy for users to find your app. What makes Microsoft Teams different here, I think, is that Teams is fast becoming the defacto place for users to get stuff done at work. Microsoft are making it the centre of the Office 365 world, and so even users that aren’t tech-savvy and wouldn’t naturally go looking for an app are much more likely to find it. Teams also does a good job of advertising the idea of apps to users – with a single-click icon always visible in Teams on the main navigation bar.

Organisations can choose the audience for your app

This is an important one for organisations that have their own in-house development teams or want to roll a specific app out to their users. Of course, you can do this today on managed desktops using things like Group Policy or standard builds, and there are already mechanisms to roll apps to mobile devices. Being able to create an application and then only make it available in an organisations private app store, not generally available, will be seen as critical to many people.

For me, what’s good about building on Teams is more than just getting free conversations. Organisations don’t want solutions that come with their own capabilities for communications because that means more compliance and security headaches. Because Teams apps can use the built-in communication features of Teams, all the existing compliance and data governance tools which are available in Teams will “just work” here.

Teams is on a roll right now, that’s been going since they first launched a few years ago. It’s a modern platform and Microsoft have shown that they’re able to be much more agile and responsive with rolling out new features than in the past. This isn’t an ecosystem that will get a new version every 2 years. Teams updates on a cadence that involves multiple new updates every month. It’s an exciting place to be a developer as new capabilities are being unlocked all the time. The Teams team are also very open about what they’re doing, with a published roadmap and active UserVoice.

This is a biggie. As a developer, supporting multiple platforms and different versions is a complete pain. There’s no exciting upside like there is with developing new features, just an every-expanding cartesian product of potential bugs and issues. Because Teams acts a bit like an abstraction layer, when you build on Teams then your application can be available on the many different variants of Teams, on desktop and mobile, Windows and Mac, iOS and Android. Anything that saves me time and means I don’t have to do boring platform-specific alignment work is a thumbs up in my book!

The development platform for Microsoft Teams has always been fairly strong ever since Teams went GA, but recently it’s got even better. With each iteration where new features and capabilities are added, developers have more opportunities to create apps that increase productivity and make users happier. That’s got to be a good thing.