This was announced at Build 2019 earlier this week. Today, when you submit Apps to the Teams App Store, they are free and there is no monetization model.  That’s all set to change though.

In a session titled: Microsoft Teams: What’s new on the platform, Larry Jin and Harysh Menon announced that soon, Teams Apps will be able to be wrapped inside Offers in App Source: 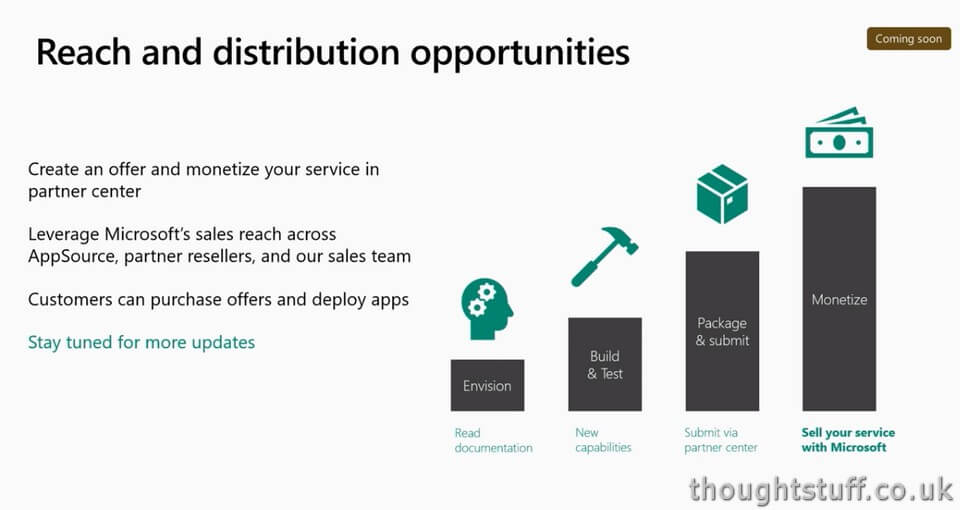 This is what Larry said:

How do you actually leverage Microsoft’s channels to bring your app, your solution, to the market and then monetize it? So that’s what we’re excited to announce.
That started today, we’re going to be on a journey where you as a developer publishing your app; you can create an offer.

And then you can monetize that offer by selling it with Microsoft on a per user per month basis.
And then you can leverage our reach; what that means is whether it’s directly through appsource.com, through our partner reseller program or even Microsoft’s Field.

We’re going to allow you as a developer to use all those channels to commercialize your app. So we’re very, very excited about that. We’re going to be rolling out more information in the coming weeks on this.

We’re going to have an early access program where we work with our partners to make sure that we can run them through that engine and everything is working fine. We’re very, very excited about this and the opportunities that it presents for our ISV partners, for our SAAS partners, and also some of our smaller partners who are looking at Teams as a net new opportunity.

This is really very exciting because the ability to monetize will act as an incentive for developers to get involved in writing Apps for Microsoft Teams. It will mean that larger, more complex and involved apps will get built, because it will be worth the effort to do so.

I’m curious and looking forward to see what people are going to bring to the App Store. As soon as I have any more information about this, I’ll be sure to share it here.