Today, we’re going to take the Day 8 sample (which joins an ACS client to a Teams meeting), plus the video features we added in Day 10, and add the ability to change audio and video devices. You could add these to any of the samples we’ve previously made – but the Teams meeting one means it’s easy for you to create a Teams meeting and join it using the Teams client, and then join with an ACS client and toggle the video and audio devices then see and hear the effect using the other client.

When we talk about audio and video devices, there are actually three different devices we are changing: the video feed, the microphone and the speaker. Each of these can have different values, and these values can be changed mid-call.

Audio devices in Azure Communication Services are changed by making a call to the DeviceManager, which then handles the actual switching of audio. No other change is needed. For anyone who has previously had to deal with WebRTC, you’ll recognise this is a significantly easier process.

For video devices, there is a method on the LocalVideoStream object called switchSource which we can use. This has the benefit of not only changing the video feed sent to the call (if the call is connected) but also updating the local vanity feed automatically.

You can see all this happening in the code below. As before, I’ll provide all the code to get it working, and then we’ll talk through it. I’m going to assume that you have already followed all of the steps in Day 5 to get the sample code up and running. Replace the contents of index.html and client.js with these versions. Don’t forget: on Line 18, replace the placeholder text with the full URL of your Azure Function created in Day 3, including the code parameter. Also, note there are additional import statements in this code, so if you’re adding to an earlier sample, be sure to include them:

Make sure both index.html and client.js files are saved, then use this command-line command to build and run your application.

If there are any compile errors then you’ll see them in the command line, otherwise, open a web browser to localhost:8080 and you should see your calling page with new dropdowns for video and audio devices, and with the “Connect with video” button enabled after a short time: 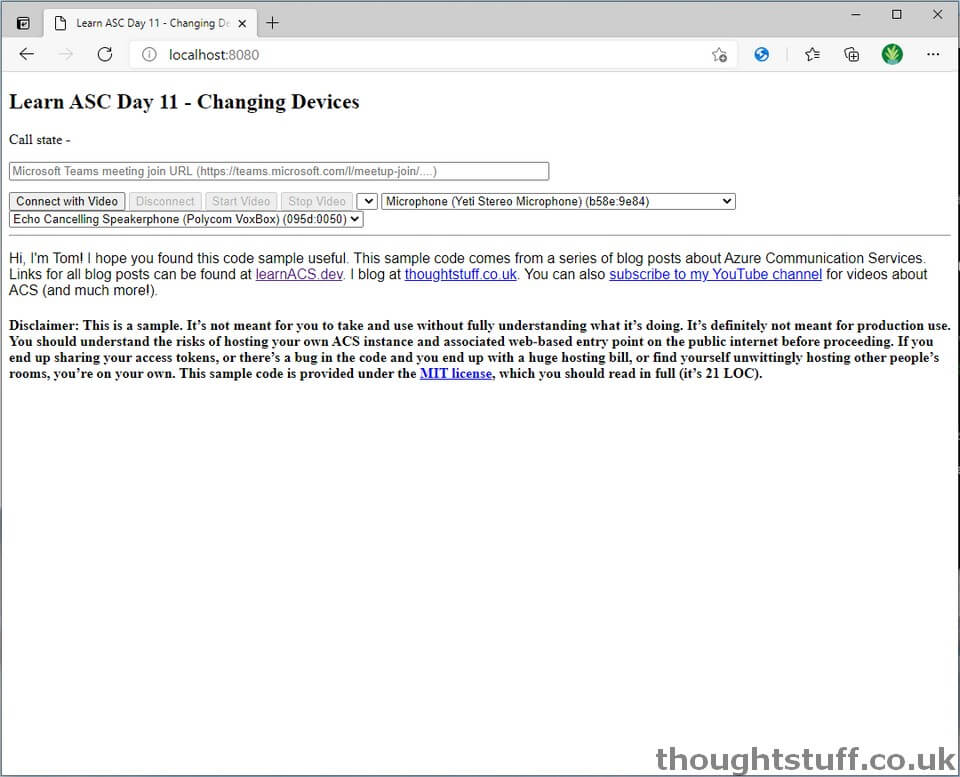 The sample code joins you to a Teams meeting, and once you’ve done that then you can try changing each of the device types to see the effect. You’ll notice that (compared to some other WebRTC solutions) device changing is quick and smooth with Azure Communication Services.

Today, we took our existing ACS code and added the ability for user to choose their own devices. Tomorrow we’re going to look at sharing screen content. Links for all blog posts can be found at learnACS.dev. You can also subscribe to my YouTube channel for videos about ACS (and much more!).