At Build 2016, during one of the sessions, Microsoft announced plugin-less support for Skype Web SDK with Microsoft Edge, with WebRTC support coming later.

Microsoft Build is an annual conference event held by Microsoft, aimed towards software and web developers using Windows, Windows Phone, Microsoft Azure and other Microsoft technologies. It’s Microsoft’s conference for Developers! I’ve only just got around to catching up on the sessions that took place at Build, which were all recorded and are available over on Channel 9.

Right at the start of the session titled “Skype for Business Developer Platform Update” speaker David Newman (Program Manager with the Skype for Business team) announced that the latest version of the Skype Web SDK (where the audio/video capabilities are still in preview) will run natively on Microsoft Edge without requiring a plugin, using ORTC. Other browsers will still be able to use the Skype for Business Web App Plugin to provide the necessary capability. 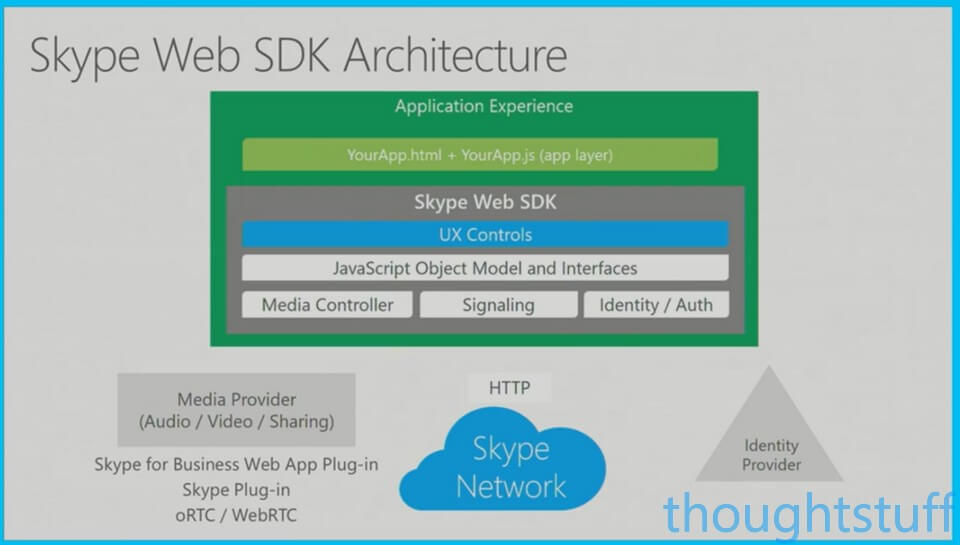 Developers have been looking forward to this announcement for a while. When the Skype Web SDK was first announced at Build 2015 audio and video delivery was offered in all major browsers with the use of an additional plug-in. This raised the barrier to adoption and was a stumbling block for many. There were various technical reasons for this: at the time there really wasn’t a better way available. Microsoft were aware of the problem and have been working on it ever since. In November 2015 it was announced that plugin-less support was coming, with WebRTC being the preferred delivery mechanism.

In September 2015, I said that “It’s looking like these scenarios will work first in Microsoft Edge and then get rolled to use the WebRTC APIs that will allow them to work in Chrome and Firefox. This is because Microsoft are building against the ORTC API. This is natively supported in Edge (from now, so it’ll hopefully just work) … but it’s also set to become part of the WebRTC 1.1 specification, so it’ll end up working anywhere that WebRTC is supported.”

What we’re seeing now is the next step in this journey: support for ORTC in the browser – which today means Microsoft Edge.  This technology has also been built into Skype for Web: which hints as the close collaboration between the two products.

David clarifies (emphasis mine): “On our roadmap we also have support for WebRTC across various other browser types as well … we have more announcements coming later this year on a fully WebRTC-based plugin-less model.”

The feature remains in Preview (not GA) and is only available on Microsoft Edge today. What’s nice however is that developers don’t need to adjust their code use either the ORTC implementation or the plugin implementation: the Skype Web SDK will make that choice for developers to ensure that the same application will work against as many different configurations as possible. Additionally, as WebRTC support is added in, it’s not expected that code changes will be necessary – this will just become another supported implementation.

How to write a simple webpage chat, voice & video experience with Skype for Business and Skype Web SDK in 160 LOC!