It’s been quiet on this blog over the last few weeks. Usually this is because of one of two things. Either life is happening to me so I don’t get the time I’d like to spend writing posts, or I’m working on something bigger than normal. This time, both of those things happened.

I recently moved house. That’s one of the reasons for my lack of activity here: moving house in the UK is a stressful and complicated process that took the best part of 4 months. But now we live in a nice house in a nice area, it’s bigger than before and I have my own study to work in, and it’s all great.

Now that we’ve moved I’m able to spend a little bit of money on side projects and “interesting things”. One of the things I’ve been wanting to get involved in for a while is Home Automation. I think this is going to huge once it becomes more mainstream, but it’s definitely still in “early adopter” phase on the bell-curve of adoption. However there are a couple of really good providers out there offering solid solutions. One of those that I’ve settled on is Phillips Hue lights.

For anyone who doesn’t know, Phillips make a range of lights and light bulbs which talk to their propitiatory Hub, which connects to your network. This gives you the ability to remotely turn the lights on and off from anywhere. In addition some of the lights contain a number of LEDs, allowing them to glow any colour you choose, giving you the ability to create different moods in your home.

One of the reasons I chose Phillips was that they have a good API for developers – one that supports turning lights on and off and changing their colours with relatively easy HTTP calls. Several of my fellow MVPs and friends had already bought into the Phillips Hue experience and suggested to me the idea of an application which could show Skype for Business presence. It’s actually taken the best part of 18 months since I was first pitched the idea to now, but it’s been knocking around my head for a while and as soon as I had the time I cleared the decks and got to work making this a reality.

This is the result: Skyue – a way to light up your Phillip’s Hue lights with Skype for Business. 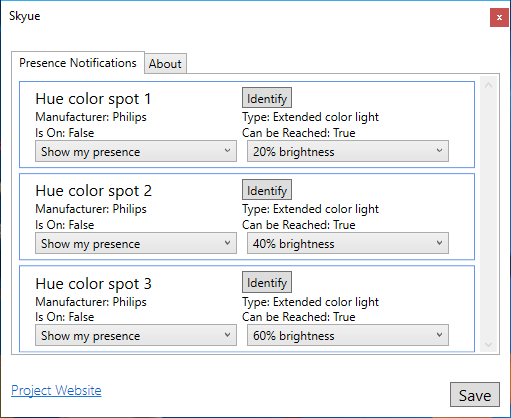 Skyue is a Windows taskbar application which monitors your Skype for Business presence and lights one or more of your Phillips Hue colour lamps with the appropriate colour. It’s free to download and use. Right now its feature set is limited and that’s pretty much all it can do but I have some exciting plans for new features such as monitoring presence of other contacts and reacting to incoming IMs and calls.

Skyue is available to download from TechNet and also has it’s own website – skyue.io – which provides some more information about what it can do.

Skyue is written as a ClickOnce application. I did this because I plan to improve it over time with new features and I wanted to make it as easy as possible for you to always have the latest version. Every time you run it, Skyue will check to see if an update is available and prompt you if there is. To be clear, I’m not particularly happy with how Skyue looks at the moment; I think the user interface needs work, and there are missing features. However, I’m a big fan and proponent of releasing early and often, so I’m having to hold my nose and go with my head, not my heart. Skyue will get better from here – ClickOnce makes that process easy.

Skyue is also the first application I’ve ever created a Donate button for. Due to the HUGE range of bulbs out there I have only tested Skyue with those that I have. If you have a bulb or device which doesn’t work then please donate the equivalent cost and I will work on enhancing the application to support it. Tweet me or email me with the details and I’ll keep you up to date with progress.
Of course, if you just love the application then you’re welcome to Donate anyway to cover hosting costs, cost of purchasing the Hub hardware, development time etc.

Finally, I’d like to say a big thank you to Pat, John, Tom & Paul who have been using early builds of Skyue for the past few weeks and have given me bug reports and honest feedback. They have also sent me photos of Skyue controlling lights in their homes which has given me the enthusiasm I’ve needed to finish this project and get to this point. Thanks guys – you’ve been great.

SkypeDevQ: Updating Skype for Business Presence with the Client SDK