Home » Microsoft Teams » Inside Commsverse: I talk to Mark Vale about running a conference in lockdown

Inside Commsverse: I talk to Mark Vale about running a conference in lockdown

A few weeks after it finished, I sat down with Mark Value to talk about Commsverse. It turned into a marathon 45 minute conversation, with Mark being incredibly open about organising a Microsoft Teams focused conference, what worked and what didn’t. I would highly encourage you to listen to the entire interview, but I’ve pulled some choice parts out of it below.

Commsverse has had a baptism of fire. Initially born out of a desire to replicate a more community focused, relaxing conference with high technical content dedicated to Microsoft Teams, the original plan was an new, in-person event at the prestigious Mercedes-Benz World conference centre: home of the famous Brooklands racing circuit on the outskirts of London, England. Sponsor slots sold quickly and everything was looking great.

The only problem, it would turn out, was the date. April 2020. The world had other plans. After initially being rescheduled to July 2020, the in-person event has now been moved to March 2021.

In Mark’s words: “The coronavirus hit us late in our planning so in-person was all set, bills were…all paid, and we were set to go. And then, we had to delay, and had to call it before the government decided to close hotel and venues, so we incurred some penalty charges because of [that].”

Mark was initially cautious about going online. It’s what everyone else was doing and he didn’t want Commsverse to just be another virtual conference. However, there were now committed sponsors, attendees and speakers all ready to go, and content prepared that would be out of date in a year’s time. “We felt it was a duty to do something online. We went about it in a way…we would only do it online if we could bring something different to try and bring that in-person feel to an online event.” 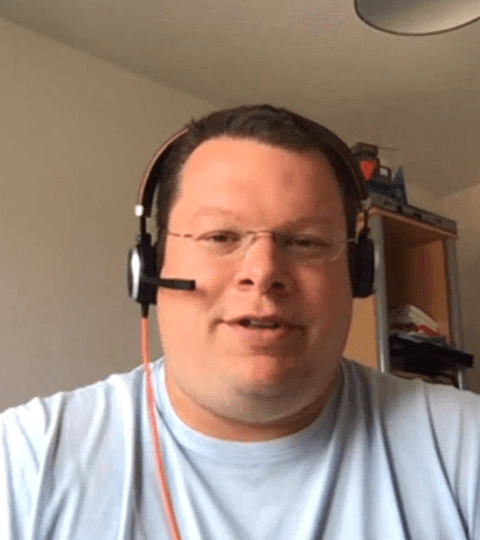 Having made the decision, Mark and his team went from nothing to everything in 2 months. That’s an achievement in itself, but Commsverse contains lots of extras compared to other virtual conferences which make this even more incredible. Mark describes it as an “ambitious timeline with lots of long hours” and remembers they were still testing right up to the day before the conference launched. They went big too: lots of content, sessions across 3 different time-zones for 3 days, and over 200 sessions in total. For a core team of 4 people (including Mark), this was a unbelievable challenge and will no doubt stand them in very good stead when they come to run next year’s in-person event.

Commsverse 2020 was a Microsoft Teams event through and through, with Teams being used to facilitate nearly every part of the experience. For Mark this was an easy decision. “You can’t have a Microsoft Teams conference on Zoom”. Where it wasn’t Teams, it was Microsoft 365: Bookings, Power Automate, Azure AD were all used in conference planning, setup and delivery.

One of the things that differentiated Commsverse from other online conferences was VR, with a virtual reality Expo Hall enabling attendees to wander around, have conversations with others, see sponsor stands and feel more like they are attending an event as opposed to just watching videos online. I was pleasantly surprised when I tried it how much it made me feel like I was attending a conference. The familiarity of the hall, the buzz of people talking, hearing voices you recognize; it all contributes to the overall feeling and experience. Mark says: “The hardest bit is convincing people to try it, and once they try it they love it”. From initially being skeptical the post-event feedback from sponsors was really positive, and that it made it feel more like an in-person conference. Mark is quick to credit Jonathan McKinney for the VR setup; in an example of how the community came together to support Commsverse.

In fact, Community was a big part of Commsverse this year, especially given the shortened timelines and workload of the planning team. “It’s a real credit to the community, they all stepped up” says Mark, noting that everyone (speakers, producers, helpers) showed up for their slots on time. With refreshing directness, he expresses his gratefulness: “I take my hat off to everyone who helped us, we couldn’t have done it without you, we would have been screwed”.

Mark is already thinking and talking about next year’s in-person event, taking some ideas from this year to incorporate. He is candid that coronavirus has hit the budget and will mean that some things which were planned, now can’t happen. However, the planning team are already working on different approaches and I’m certain that if they, and Mark,  apply even a part of the enthusiasm, passion and effort they have given to Commsverse 2020, then Commsverse 2021 is going to be epic.

Watch my Talk on Building Applications in Microsoft Teams