This was announced last week but I’ve only just got around to writing about it. I wasn’t going to write anything at all, but the more I thought about it the more I realised I had some mixed views about this.

It’s now possible to “pop-out” Teams applications into their own window, which can then be resized or moved onto another monitor. There are two ways to do this: 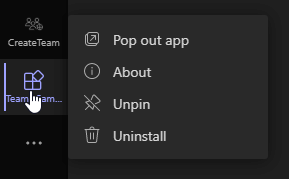 You can pop-out any application apart from the “core” Teams functionality such as Activity, Chat, Teams, Calendar, Calls and Files.

There’s nothing extra developers have to do in order to enable this (but also seemingly no way to prevent it from happening). Because tabbed applications are really just iFramed webpages behind the scenes though, there shouldn’t really be any change in how those application function.

As far as I can tell, there’s no way to maintain the popped-out applications once you quit Teams, they don’t re-appear on re-load.

I’m a little bit conflicted by this. On the one hand, it’s good to give users choices, and for people with larger/multiple monitors who spend a lot of time in one or more apps this will be a productivity win by enabling them to keep a specific application open alongside other information in Teams.

On the other hand, I can’t help thinking that this goes against the whole point of adding applications to Teams, which is that information and action is displayed to the user in the context of conversations and communication they are having. If the app is so large or so much the focus of a user’s activity that it needs to be opened and displayed completely separately from Teams then it’s not really a Teams app, it’s a stand-alone app which is using Teams as a launcher shortcut. Is Teams really the right place for apps like that?

“It might be that in Teams apps, Microsoft has created a packaging and manifest technology which can be exported outside of Teams.”Tweet This

I’m really interested to see if this will evolve further. It might be that in Teams apps, Microsoft has created a packaging and manifest technology which can be exported outside of Teams. For instance, what if these applications could be “exported” to Windows and given their own taskbar icon or desktop shortcut? Same manifest, same application, same update process, just processed by Windows rather than Teams. All of the IT Admin controls for allowed or denied applications and policies are already in place and this would provide a powerful yet simple way to manage desktop applications (well, at least those desktop applications which can be rendered as web pages inside an iFrame). To be clear I don’t think Microsoft has any particular plans to do this but it would be an interesting evolution of Teams apps for sure.

Microsoft Teams has a new, more granular AND resource-specific permissions model for apps! What is Resource-Specific Consent (RSC) and how do I use it?