For the second time in as many weeks, Skype is making the tech news.

The full announcement is here, and it’s been repeated on all the major tech-news sites. It’s big news, for sure, but I want to temper the excitement with some realism. Sorry :).

When it comes (and it’s worth noting that it’s NOT generally available yet) it will require a plugin to work. That’s because Microsoft are using WebRTC to deliver the audio/video capability which isn’t yet supported on all browsers.

This means that it will only work in places where you can install plugins. For the most part, that’s desktop browsers, and excludes mobiles, tablets, iPads, etc etc. Unfortunately, that’s a pretty big use case, and people expect stuff like this to “just work” everywhere. From a technical perspective, I can see why it can’t be done – but users won’t see it like that, they’ll just get a bad experience.

I don’t know why Microsoft have chosen to release Skype for Web today, rather than waiting until WebRTC has broader adoption. Perhaps they feel jostled in the increasingly competitive WebRTC-based collaboration space and believe they need to act to show that they’re still relevant. I just hope they don’t loose user’s hearts and minds when they find out they still need to be tethered to their desks… the one place they probably have the desktop client installed!

I also don’t know why they’ve chosen to make the announcement, but not have any way for people to access the Beta program. I understand problems like scale, and bug-fixing – but if you make an announcement like this, you have to expect people to want to kick the tires on it. There isn’t even anywhere to register your interest. Contrast this with Inbox (the new email-management app from Google). This was also a very popular Beta which needed to be rolled out at scale. Although I didn’t have access immediately I could register my interest. 1 week later my account was enabled and I received an email. Microsoft should have had this in place. Anything less and there’s a suspicion of vaporware.

Show Me the Screenshots! 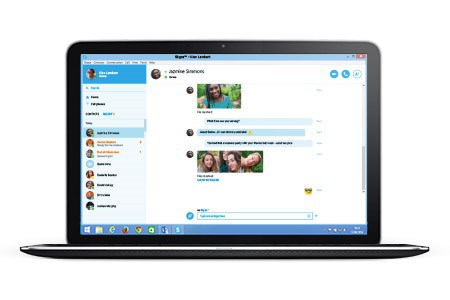 The other thing I didn’t like was that the screenshots on the announcement post were of a Skype Application – NOT Skype running in a browser. Why on earth would you do that, unless you didn’t have anything to show yet?

I’m not saying that Skype for Web isn’t a thing, I’m sure it is. I just wish Microsoft could have lined up the announcement with the actual delivery – it would have given them a perfect opportunity to remind everyone why Skype is a great communication and collaboration tool.