Developers can learn more about the Skype for Web SDK with a free tutorial of more than 30 sessions! Check out skypewebsdk.com to get started.

However, currently the API is in Preview mode, and enabling audio/video calls in a browser requires access to a plugin – the same plugin used by the Web Add-in used in Microsoft Lync / Skype for Business to allow external users to join via a browser.

In a session at Build 2015, The Skype Developer Platform and Skype Web Developer Capabilities, at around the 33 minute mark, Srividhya Chandrasekaran (Program Manager on the Skype for Business team) showed what the final version of the API will look like, which includes Web RTC support as well as support for a Skype (consumer) plugin. 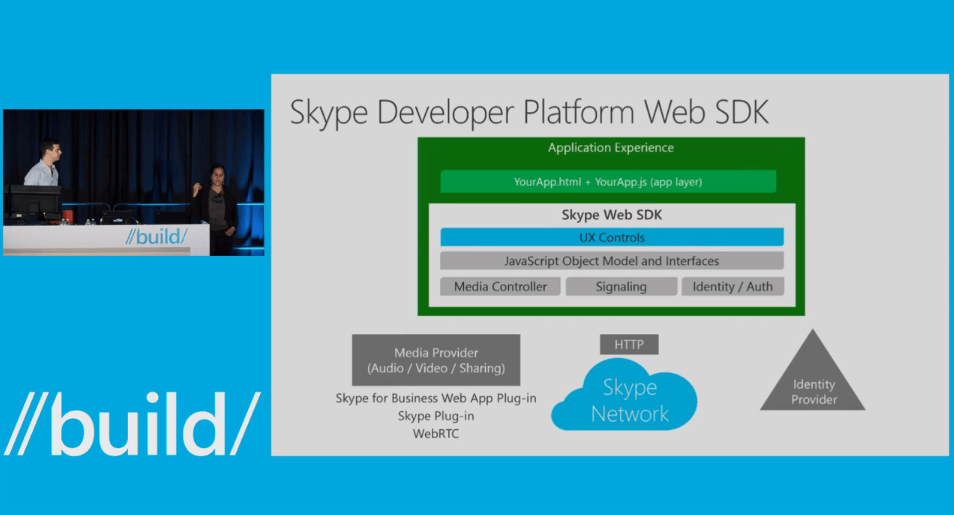 Also worth noting is support for “Sharing” – which I take to mean Desktop Sharing. This isn’t in the Preview, so it’s good to know this is coming. Also coming (it would appear) are UX Controls, which have been previously promised but are absent in the most recent release.

I don’t know anything about the “Skype Plug-in” but I’m guessing it will enable a scenario where the user has Skype installed, and this would give a better experience than WebRTC (or maybe the user is using an older browser that doesn’t support WebRTC.

At last week’s MS Ignite, this was again mentioned, this time by Andrew Bybee  (Principle Program Manager Lead) who also added that the intent here was for the API to provide an abstraction to the media layer. The developer won’t need to know or code for specific plugins or technologies being available – the Media Provider built into the API will choose the right approach depending on what’s available. This is similar in approach to, say, SignalR – where the best communication technology is automatically chosen for the developer based on what’s available and abstracted from the developer.

There weren’t any announcements either at Build or at MS Ignite about timelines. However, a blog post published during Build, Today at Build—new possibilities with the Office platform, whilst covering the new features of the Skype for Web API contained this line:

This will include support for WebRTC in Win10 and across other browsers later this calendar year, eliminating the need for plug-ins for the most common scenarios.

This is really good news for developers writing applications for end-users which won’t necessarily have the Skype Web App plugin installed. Being able to make use of WebRTC which is becoming a standard feature of modern browsers will really open up interesting development opportunities for Skype for Business enabled organisations to reach out to, and connect with, their end users.